Black, Hispanic people more likely to be held in jail before conviction, according to Colorado DA data 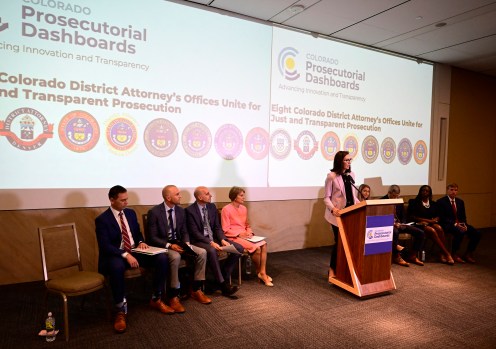 Alexis King, District Attorney for the 1st Judicial District, speaks during a press conference announcing publicly available data dashboards at the History Colorado Center on Sept. 08, 2022. The Colorado Prosecutorial Dashboards project, a first in the nation, was designed for statewide use of data to “improve the fairness and effectiveness of the criminal justice system.” (Photo by Andy Cross/The Denver Post)

Eight Colorado district attorneys released detailed data about their operations Thursday in an attempt to be more transparent with the public amid broader criticism of racial disparities in and distrust of the U.S. criminal justice system.

The data offers a look at the inner workings of Colorado’s prosecutors in unprecedented detail, with researchers tracking 55 different aspects of prosecution, ranging from charging and bond decisions to sentencing to how long cases take to be resolved.

“For too long and too often, the justice system feels like a black box of information,” 18th Judicial District Attorney John Kellner said during a news conference Thursday. “…That changes today.”

The data is presented publicly in online dashboards — collected at data.dacolorado.org — for each of the eight offices that participated in the research project, which was funded by an $882,000 grant from the Microsoft Justice Reform Institute. The research was carried out by the University of Denver’s Colorado Evaluation and Action Lab and by the Prosecutorial Performance Indicators project.

Five Front Range district attorneys and three elected prosecutors in other areas of the state participated in the project, including the district attorneys in Denver and Boulder, as well as in Jefferson, Larimer, Arapahoe, Douglas, La Plata, Montrose and Eagle counties, among others.

Among the data now available from eight Colorado district attorneys’ offices: The average amount of time between when felony charges are filed and the resolution of those cases, in the second quarter of 2022.

“We are not offering data for data’s sake,” said Alexis King, the district attorney in Jefferson and Gilpin counties. “We are offering data as a step towards transparency, to promote public trust and really to solve big problems.”

King said she hopes the data will help inform the district attorney’s office of where racial disparities exist within the court process so that the prosecutors can work to remedy them.

The researchers in King’s district found that Black and Hispanic people convicted of crimes were more likely than white people to be held in jail before they were convicted — a trend that also is seen, to varying degrees, in five other judicial districts.

In 2021, about 31% of white defendants who were ultimately convicted of a crime were held in pretrial detention in Jefferson and Gilpin counties, while 43% of Black defendants and 36% of Hispanic defendants were detained, the data shows.

The researchers have not yet explored the reasons for the disparities, but the team hopes to perform a more detailed analysis in the future to pinpoint the causes of identified trends, which could include an analysis of defendants’ criminal history and how that impacts pretrial detention rates.

“When it comes to implicit bias and bond, these are often decisions that are being made really quickly, and I think that with long-term outcomes (in cases) we don’t see as much disparity, but in that quick decision-making we have some implicit bias we need to address,” she said, adding that although judges set bond, they often listen to prosecutors’ suggestions.

“I don’t shirk responsibility,” she said. “We have a lot of power in that moment.”

In the 18th Judicial District, which includes Arapahoe, Douglas, Elbert and Lincoln counties, the office filed just over 32,000 cases in 2019, but filed only 25,900 in 2021, the data shows. That coincides with a decrease in the number of felony cases law enforcement sent to the office: the district attorney’s office received nearly 6,000 felony referrals in 2019, compared to about 4,500 in 2021.

King, who saw similar declines in her office, suggested widespread understaffing of law enforcement agencies might be contributing to the lack of referrals, though she emphasized more research is needed.

The police departments in Aurora, Denver, Colorado Springs, Boulder and Arvada are all short-staffed, as is the Jefferson County Sheriff’s Office, according to information provided by each agency. Denver police are budgeted for 1,596 officers but have just 1,428 on the force now, with another 64 police recruits, leaving just over 100 open positions.

The elected district attorneys who spoke at Thursday’s news conference emphasized that the new data is a starting point for their offices from which to consider changes to policies, training and procedures that will help to ensure equity in prosecutions.

Eighth Judicial District Attorney Gordan McLaughlin, who works in Larimer and Jackson counties, said he is expanding implicit bias training to everyone in his office.

“While it’s attorneys making offers, everyone in our office touches a case, so we are trying to spread that knowledge about bias and how it impacts throughout the entire office,” he said.

Denver District Attorney Beth McCann said the data will be updated and monitored quarterly, which will allow prosecutors to make ongoing adjustments aimed at equity.

The pilot effort, which could be expanded statewide, is funded for another year, at which point the prosecutors will need to seek additional funding to keep on collecting and sharing the data.

Boulder District Attorney Michael Dougherty said Thursday that he hopes releasing and maintaining the data will begin to rebuild trust in the justice system.